Sam's Story. In memory of Chloe

In memory of Chloe

When there was discussion of doing a run and fundraising for Twins Trust, I jumped at the opportunity. The bereavement group has been a lifeline to me through such difficult times. I loved running, pre-IVF/pregnancy journey, but had found it difficult to get back into, after losing our beautiful daughter Chloe, in early 2018. It is so important to me to participate in fundraising as a way of making Chloe proud and keeping her memory alive. I had done a couple of fundraising runs since the twins but without much training. I had lost my heart for running after losing Chloe.

In December 2017, after a relatively normal twin pregnancy, I gave birth to non-identical girls. Chloe was diagnosed with Arthrogryposis Multiplex Congentia after birth and brain dysgenesis at around 5 weeks old. We were blessed to have Chloe for 7 weeks and 1 day before her conditions meant we had to say goodbye.

My twins were IVF and I had slowed down on my running while going through IVF. Once I’d found out I was pregnant with twins, I was reluctant to start running again. Losing Chloe meant that I lost part of me too. I didn’t want to be the old Sam who loved running, I just wanted to be a mum to my girls. Even though everyone suggested I start running again, every time I tried to get motivated, my efforts would fade away. Doing the run for Twins Trust made the difference I needed for my motivation. Taking part as a team with fellow bereaved parents and raising much needed funds gave me an aim to work towards.

I began training in the New Year with a clear plan. I had only joined the befriending team in December 2019. To support other parents who have lost a twin has given me a purpose to my days and allows me to honour Chloe’s life. Training for the run with the support of other befrienders and the chance to run alongside them on race day was a privilege I was looking forward to.

Then as you are all aware, in March we went into lockdown and the likelihood that our race would be going ahead was dwindling. At the end of March we were informed that our run wouldn’t be going ahead, however we could do it virtually. The whole team would be running, but we would be scattered across the country. Training was going great during lockdown and I was looking forward to running a great virtual race. Then disaster struck and I developed a calf injury. I lay off my training and concentrated on my recovery. I was back on track fairly quickly.

Two days prior to race day I went out for a test run to see how my injury was and returned after 1.3 miles. I was so demotivated but I knew how much we had raised and the reason for doing the run. I was devastated that I couldn’t join the rest of the team that were going out that weekend. However, the buzz on the social media group was fantastic and I enjoyed watching everyone finish their runs. After some rest and sound advice from the group I completed my run a week late. I was joined by a very special friend who is also part of the Twins Trust bereavement group. It was an absolute scorcher but we completed the 10km for my daughter Chloe, and her twins William and Max and all the other babies and children gone too soon. 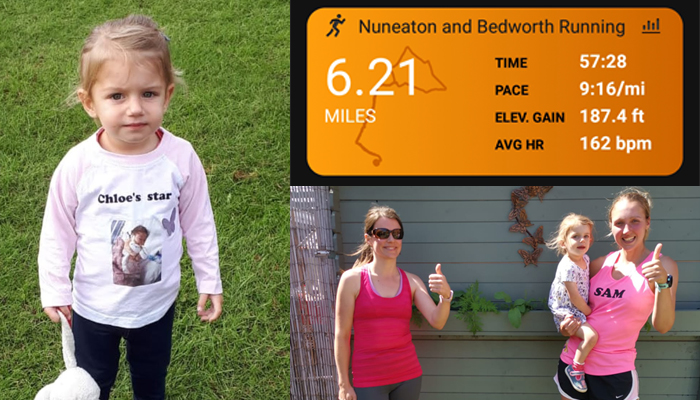 Although we couldn’t all be together at the race, to be part of the befriending team and to achieve £6,006 (£7,303.65 with gift aid) for the run was a privilege and a wonderful example of teamwork and determination after loss. I hope we get the opportunity to do another run together in the future and raise more vital funds for Twins Trust.