On one of the hottest days of the year, a team from Twins Trust brushed up their ball skills and took part in a 12-hour netball fundraiser organised by supporter Sam Brennan and her teammates from Farnham Netball Club.

Sam sadly lost her twin boys Jack and Harley in November 2017 and chose to support us after we reached out to her following her tragic loss.

Sam was pregnant with identical twin boys and was diagnosed with TTTS (Twin to Twin Transfusion Syndrome), a rare but life-threatening condition that affects 10 to 15 per cent of identical twins that share a placenta.

After undergoing unsuccessful treatment, she tragically lost both her boys.

Sam said: “When I found out I was pregnant with twins I joined the Twins Trust Facebook group hoping to meet other parents and get some tips and advice.

“Then when I lost the boys, they reached out to me and offered support. It’s a charity close to my heart and is why I want to raise funds for their Bereavement Support Group and their research into TTTS.”

Teammates rallied round Sam, and her netballing friend Tina whose son Tom, aged 18 had taken his own life just a month earlier after battling with mental health issues.

Within one month of each other these two good friends and members of Farnham Netball club experienced tragic losses in their lives.

Both supported each other through this upsetting time. The fundraising event provided a focus for both of them and the support they received from their fellow teammates and the local community in gathering auction and raffle prizes was immense.

The matches took place in temperatures of over 30 degrees – a staggering £12,230 - will be split between Twins Trust and mental health charity Mind.

Keith Reed, Twins Trust CEO joined in on the day and played his first ever netball match! He said: “We are incredibly grateful to Sam and her netball team for choosing Twins Trust as co-recipient of the funds raised at the wonderful 12-hour charity netball match.

“It was a super day and we were proud to be able to share that with everyone who had given their time and money to help.

“We were also able to submit a team to play on the day where the motto ‘it’s not about winning, but taking part’ really came into play!

“It’s heart-warming that Sam wants to give back in this way and we would like to thank Farnham Netball Club and everyone who took part on the day by either playing, or donating one of the fantastic raffle or auction prizes.”

The matches took place between 8am and 8pm on Sunday July 1 at St Nicholas’ School in Fleet. There was a party atmosphere throughout the day with entertainment, cake sales, ice cream van, and fun games to keep children entertained. 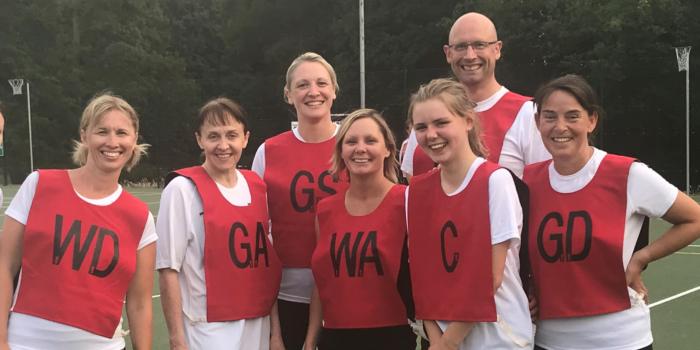