Actor and dad-of-two Stewart O’Reilly has completed a huge challenge – ten in fact – with his good pal Matt Holloway to raise funds for Twins Trust following the loss of his twins.

Stewart from Cam in Gloucestershire came fifth in his age group in Decathlon at The British Masters Athletics Championships in Hull this summer.

“My mate Matt, who is an athletics coach in Gloucester, wanted to do something unique and challenging as he turned the big 4-0 and persuaded me to join him.

“I’d wanted to do some sort of challenge and raise money for Twins Trust after we lost our twin boys in 2013. 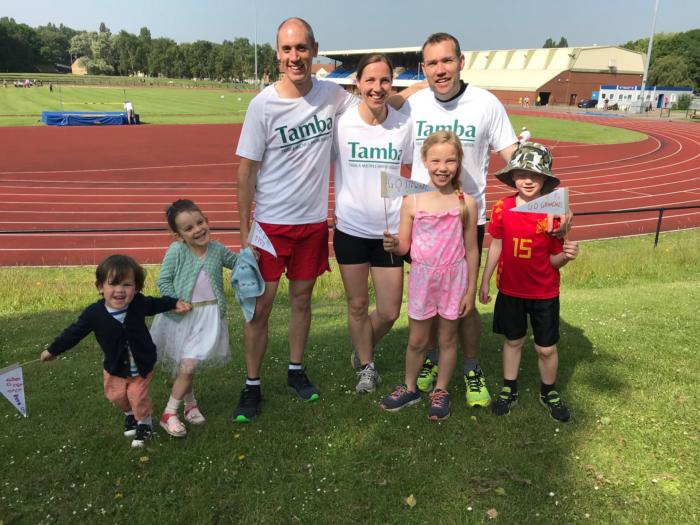 “Sadly, they were diagnosed with TTTS (twin-to-twin transfusion syndrome). My wife had laser ablation surgery which worked, but at 21 weeks her waters broke and she went into labour.

“We had such brilliant care at Bristol. Our consultant came in at the weekend when he was off and had to tell us the devastating news that there was no chance of a good outcome and the boys were born later that night.

“It remains the worst days of our lives, but also we see it as a strange kind of blessing because the boys gave us the gift of becoming parents, which we will always be thankful for.

“Our love for them was intense and we remember them every day and try to honour them as best as we can.

“We were told about the support that wins Trust, and the charity Sands, could offer following a bereavement, and while we didn’t access any of their services, it was always in the back of my mind that I wanted to fundraise for Twins Trust.”

Stewart and his wife Jennie now have two wonderful children, Dinah aged 4 and Elliott aged 2, who cheered Daddy on.

“The weather was pretty hot, but I’d take that over rain as pole vaulting in the wet is not easy!

“I was so up for the challenge and had been training since January in all weathers, which has mostly been fun. Having not competed in athletics for more than 20 years, it has been a quick learning curve, especially as pole vault isn’t really taught in school.

“The worst event for us both was the 400m sprint and the most fun has been the pole vault. It’s a great feeling when you get higher than your own height!”

And the friends were joined by Matt’s kids Bethan and Jacob, along with Matt’s wife Jacqui who competed in the Heptathlon this year – her fourth one in a row.

You can sponsor Stewart and Matt here.