When Steven Bowman crosses the finish line at this year’s Brighton Marathon, six little arms will wrap around his waist to give him a well-deserved hug.

It’s a gesture Steven thought he might never get to experience, after enduring a long struggle to have children with his wife Louise. And even when Louise did become pregnant with their daughter Daisy, and then later with twins Connie and Scarlett, the road to parenthood wasn’t as smooth as they’d both hoped it would be.

That’s why Steven has decided to run the Brighton Marathon – his third time competing in the race. It’ll be a fitting tribute to his entire family, but particularly the twins and Louise, as he’ll be raising funds for Twins Trust. 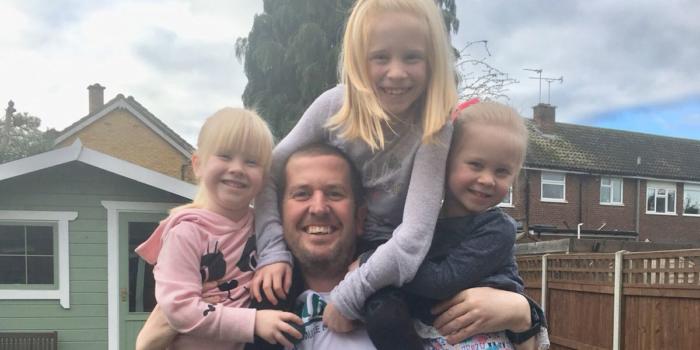 Steven, 39, said: “I first heard about Twins Trust when Louise and I went on one of their antenatal courses. Now Louise works for the charity and runs the helpline and the support groups, including a group for bereaved parents.

“They do some amazing work and support twin and triplet families like ours.

“They’re not well-known outside of the multiple births community, so I’d really like to raise money for them, but also wear the T-shirt so people can see the name and hopefully learn a bit more about them.

After the last Brighton Marathon, I swore I’d never do another one. But I decided to make this my third and final one and do it for Twins Trust.

Louise and Steven, who live in Ashford, Surrey, struggled to become parents for a number of years before being told it was simply impossible without medical intervention. Their only choice was to consider expensive IVF treatments, which thankfully worked first time. Louise’s parents offered to step in and contribute a large portion of the cost, with the couple scrimping and saving to make up the rest.

The girls are actually “unofficial triplets” as all three embryos were fertilised at the same time. As Louise jokes: “Daisy went in the oven while the twins went back in the freezer for later.”

But after a textbook first pregnancy with their eldest daughter Daisy, Louise and Steven had the harrowing ordeal of experiencing Connie’s placenta bleeding during pregnancy. They also had numerous trips back and forth to the hospital after she was born, when Connie developed bronchiolitis and sepsis.

Steven, who is an electrician at Thorpe Park, said: “We knew there were some risks with having twins, but you just think it won’t happen to you. But then Connie’s placenta started to bleed and they had to be delivered early.

“It was unbelievable the amount of staff that were involved in delivering them. Daisy was a breeze and we were more or less out the hospital and home straight away. But Connie and Scarlett’s birth was completely different.

“Scarlett came out but she was crying, so we thought ‘oh, she’s fine’ .Then Louise was pushing and pushing but Connie just didn’t want to come out. They struggled to pull her out with forceps and she was born in her amniotic sac. Her waters burst all over the floor and she wasn’t crying or anything. They were massaging her for what seemed like ages before she cried.”

Steven and Louise thought the crying meant she was fine, but Connie was taken to the SCBU (special care baby unit). Her blood levels were low and doctors said she’d need a blood transfusion.

Louise said: “I was just told to try and get some milk for her so I concentrated on that. Connie had a full blood transfusion and all three of us had antibiotics for three days before we were allowed home.”

Finally, the twins were given the all clear and allowed home with their parents. But it’s an experience Steven and Louise will never forget.

Keith Reed, CEO of Twins Trust, said: “Louise knows more than anyone at the charity how many of our families sadly don’t get to cuddle their babies each day, so I know Steven will be extra motivated when he sets off on his last marathon.

“We’re so incredibly grateful to Steven, and indeed anyone who wants to take on a challenge to raise funds for the charity, for supporting our vital work. We simply wouldn’t exist without these fantastic people.”

Twins Trust supports families of multiple births throughout the UK, right from pregnancy through to school days and transitioning into adulthood. Sadly, part of this support includes a bereavement support group as, although multiples only represent approximately 1.5% of pregnancies, they account for about 6% of stillbirths and 14% of neonatal deaths.

Steven said: “I definitely have it all in the back of my head when I’m running. Whenever you do something like this for charity, you always think ‘well whatever I’m suffering right now, it’s nothing compared to what other people go through’.”

Training has now well and truly commenced and even the girls are getting in on the action – joining in with Daddy when he does his stretches and warm-ups before heading out on a run.

“Daisy remembers the last marathon I did and likes playing with the medals,” said Steven. “The last two marathons I did were about 4hours but I think I’m going to be pleased with 4hours 30mins this time.”

The family are planning a 40th birthday party and holiday when all the hard work is over.

Steven also joked: “Going out training at night after work can be hard, but sometimes it’s nice to escape a house full of women!”