When my eldest twins, Seve and Aurelio, started school, I was excited yet silently nervous. As October babies they were more than ready to start school, but I wasn’t quite as prepared as they were. When we first brought two tiny babies home, I wondered how we would survive the week. The thought of school seemed like a lifetime away and yet the years had flown by and the first day of school arrived before I knew it. For the past five years I had done everything in my power to protect them. It was scary to think that I wouldn’t be there to offer them a shield anymore. But it was time for them to take their first solo step in the world and they were lucky they could hold each other’s hands whilst doing it. 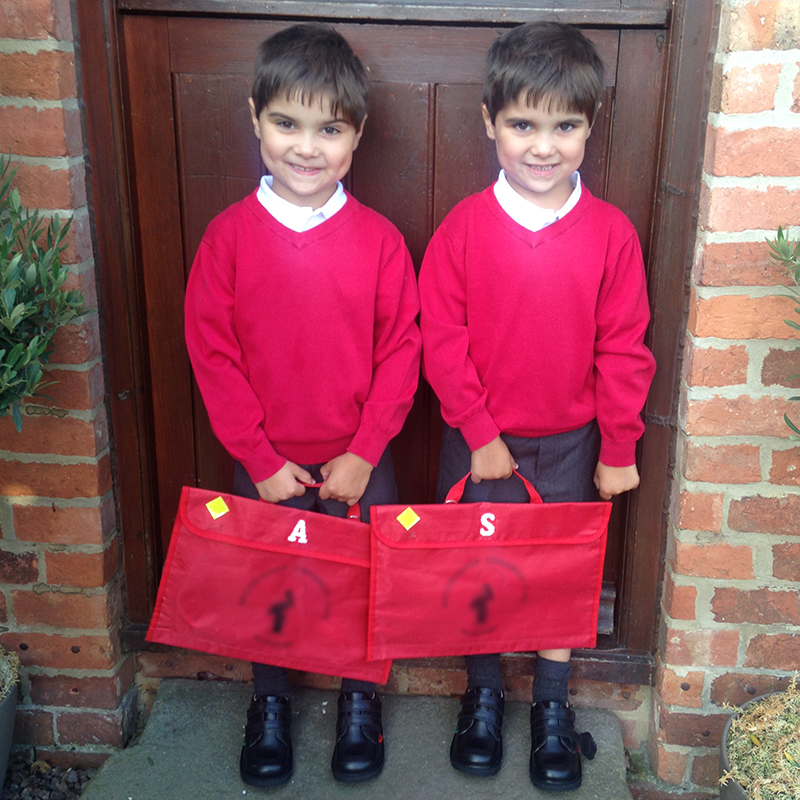 They loved their settling-in sessions and talked excitedly about their teacher all summer. We had fun picking their uniform together and they continually asked if it was time for school, on countdown for September. They loved helping to label everything and had fun choosing a new bag and water bottle. It was hard to find a balance between getting excited for school but not too over excited!

When the big day arrived, they were up and dressed quickly and we arrived at school super early. Being first in the queue was great as they didn’t have to wait around to be let in and the nerves didn’t have time to fester. They were greeted by their teacher and ran in without even looking back. I was so proud of their confidence, but my stomach was still in knots. Throughout the day I tried to keep busy and was a happy bundle of nervous energy wondering how they were getting on.

We collected two extremely giddy boys at 3.30pm. They had no real stories of their day other than that there was another set of identical twins in their class and that another set would be starting in two weeks. I wasn’t sure if they were making this up or it was actually true, what were the chances?

As the weekend approached, I was looking forward to spending some time with them after missing them all week. While they had settled so well at school, nothing had prepared me for the extremely tired and grumpy children I found on Friday afternoon. They were grouchy, a bit rude and a little tearful too. Being on their best behaviour all week and all the firsts that they had experienced was bound to need some release at some point. We noticed this pattern throughout the first half term and cancelled a lot of the weekend activities we had planned. They were happy to just be at home and do very little.

Like most parents of multiples, I know that having two rather than one hitting milestones and doing so many of their first experiences together can bring extra pressures and stresses.

Dealing with two grumpy boys was hard and they both wanted me, and it reminded me a lot of the early years. We’ve crossed some interesting problems over the past few years. The first time one got an award, and the other didn’t was hard, there were tears. Now we’ve learnt to celebrate all wins as a family, which has worked well. When they were seated on separate tables, they were initially a bit wary but soon came round and this has helped their independence. When one gets picked to do something and the other hasn’t, we have again tried to celebrate with a family treat. So far, we’ve been lucky with birthday parties as they’ve both been invited to all.

I’ve had to become very organised at home and have learnt to put every school event in my phone calendar with numerous reminders. I take photos and screen shot all school correspondence as it seems to come in various forms (letters in a bag, texts, emails, or on the school app). I have a photo album with everything in one place. The class WhatsApp group has become an invaluable source of information and reminders. We are lucky that everyone is helpful and we all work together to ensure the class are all at school in the right clothes with the right things. We try and get most things prepared the night before. As they’ve got older we try and give them some responsibility for their own things, although I constantly have to check. For homework we always try and sit together to get it done although it is getting trickier with all the after-school activities.

Now it is nearly time for my second set of identical twins, Nico and Rafael, four, to start school, which again has come round too fast. I’ve cleared the diary in September. Our weekends will be quiet and mostly at home as I’m prepared for the toddler-like tantrums to rear their ugly head once more. We have been talking a lot about school to prepare them for what is to come. Having their older brothers, twins Seve and Aurelio, nine, and their brother Corrado, six, there has been a great introduction for them. Not only will they have each other in the classroom but their three siblings will be waiting for them in the playground. Their teacher has asked for what to look for to tell them apart and she is already very good at seeing who is who.

On their first day, even though I’ve done this before, I’m sure I that the quiet nervous energy will return. So, I’m making sure I will be busy but will also make time to celebrate that we’ve got all our children to school! 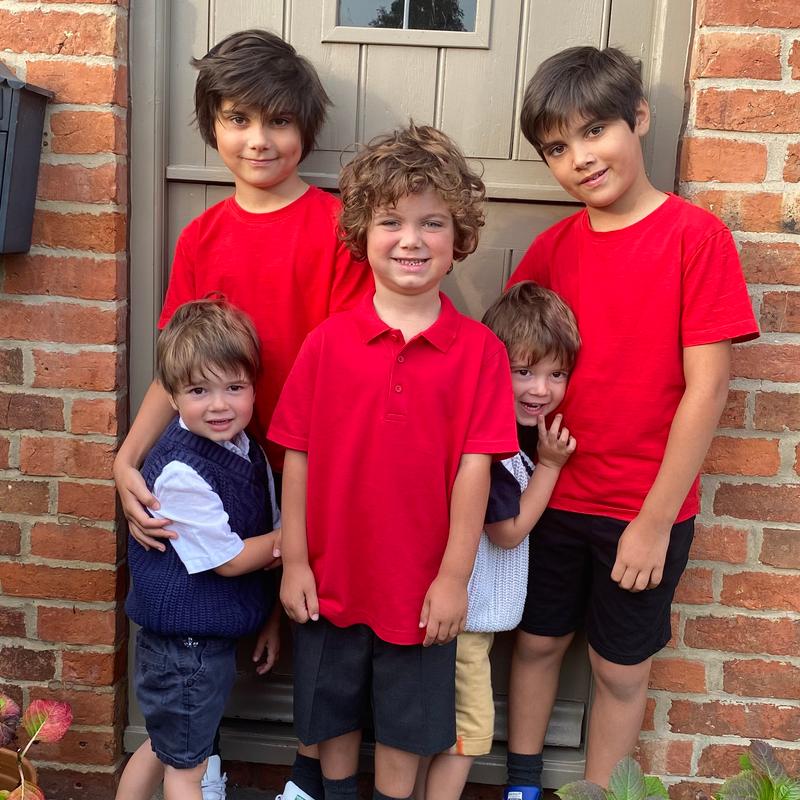