Our first Christmas with twins

Christmas will be incredibly special for Viki Shaw and partner Daniel Lord as they celebrate it for the first time with their rainbow baby twin girls Summer Violet and Isabella Rose.

Viki and Daniel have been together for over eight years, first meeting as teenagers and then again on a night out in 2011. Five years ago they felt a baby would complete their family.

But the devoted couple from Burnley, Lancashire, suffered three devastating losses before welcoming their beautiful girls. 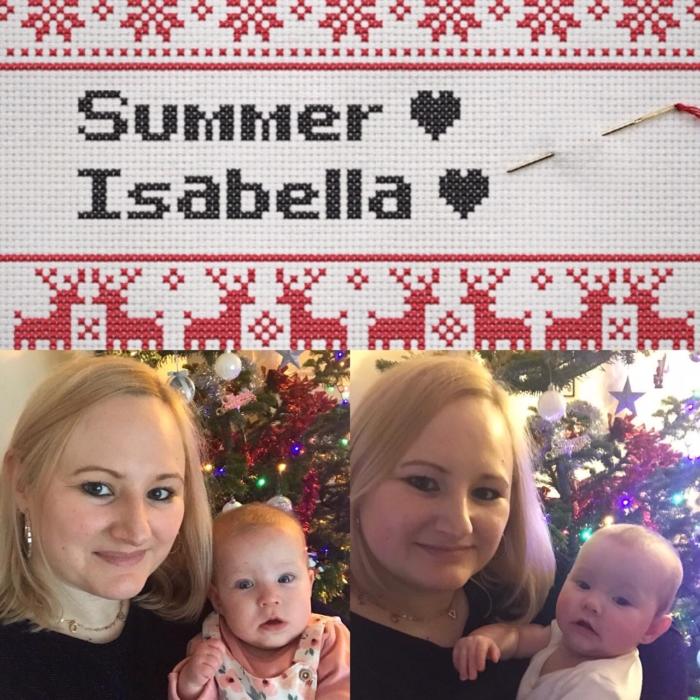 The couple were distraught when their longed-for baby, Dominic Leo was born sleeping at full term on 2nd June 2015 at the Lancashire Women and Newborn Centre (LWNC) in Burnley.

Viki went into natural labour at home and the couple went to hospital thinking they would be bringing him home as there was no reason to think otherwise. It was only when they got to hospital that they received the devastating news that sadly there was no heartbeat.

Following their tragic loss, the couple raised £7,000 to help other bereaved families.

Donations were made to the bereavement team for a handmade bespoke crib and cuddle cot at the Royal Lancaster Infirmary (RLI) as LWNC in Burnley already had four cuddlecots, where the RLI didn’t even have one.

They also supported SANDS, the stillbirth and neonatal death charity and a local charity ‘Friends of Serenity’ that provides support to grieving families.

In late 2016 the couple felt it was time to try for another baby. Sadly Viki suffered two late miscarriages, both at 17 weeks, Rainbow Angel in February 2017 and in December of the same year, Star Aries.

Viki said: “It was very hard trying for a baby again as we had suffered so much loss and were anxious that the same would happen again but we wanted to have a family.

“We didn’t receive any counselling support. I was mainly supported by my immediate family who have been amazing and some close friends.

“There is an online angel parents’ network and we help and support each other as much as we can as we know what each of us is going through.

“I also wrote a blog throughout my whole journey which helped me greatly to express my feelings.”

Viki was delighted to become pregnant again. But this time things felt different. An early scan revealed not one, but two babies! The couple were thrilled, but it was understandably an emotional and anxious time.

“As we had losses at different stages, we didn’t feel safe throughout the whole pregnancy,” said Viki.

“I had severe pregnancy sickness and gestational diabetes so had to inject insulin four times a day and constantly check my levels to keep my blood glucose in control.

“Due to the loss history, we were classed as a high-risk pregnancy, so I was consultant lead throughout, we had weekly scans and were very closely monitored this time which really helped put our minds at ease.

“I had many visits to triage for checkups if I was worried about things, which you can imagine did happen and they took really good care of us. We are so grateful for their exemplary care.”

Viki gave birth, with her beloved Daniel at her side, via a planned c-section when she was 35 weeks and two days. The girls were born on 12th June 2019 (four years and 10 days after angel Dominic Leo).

Both were perfect and healthy weights. Summer Violet was 4lb 10 and Isabella Rose was 5lb 5. They family came home from hospital after just four days as the girls were doing so well.

Viki said: “Being a twin mummy is a big challenge, double the work but double the love which is exactly what we needed after suffering so much loss.

“These two beautiful girls have brought immense happiness back into our lives and we couldn’t be more grateful that they are ours.”