"Pride was always important to us as a couple... but even more so now we have triplets"

The journey to parenthood was never easy for Angela McArthur and Siobhan Cullen but after realising they wanted to start a family, they looked at the options available to them as a same-sex couple.

The greatest surprise was yet to come as little did they know that they would welcome not one, but three babies into their lives.

Angela and Siobhan had a civil partnership in 2013 in Northern Ireland. Knowing they wanted to start a family, they started researching the choices they had.

Angela has shared their story during Pride Month and wants to give others thinking of starting a family the same hope they had at the beginning of their adventure. 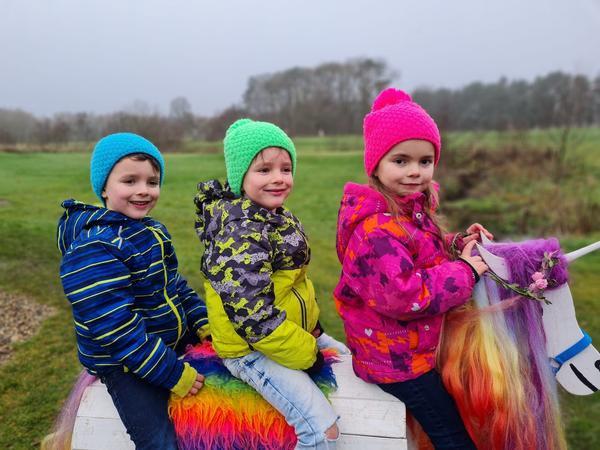 Angela, who lives in Belfast, said: “Siobhan and I knew we wanted children and knew we had several options ahead of us from having our own biological children to fostering or adopting. However, we both agreed we would like to try and have our own first.

“This gave us another set of decisions to look at.”

Angela campaigned for equal marriage for people who were UK citizens but had had a civil partnership in Northern Ireland. These couples were not given the same rights as other UK citizens in 2015.

Angela added: “For us this decision was really important as we wanted both of us to have the same legal rights as a heterosexual couple.

“At the time, to have same sex parents on the birth certificate, they need to be civil partnered, unless we used a UK fertility clinic.

“We looked at DIY fertility methods using sperm donations through a website. We looked at going to Denmark or Spain and finally we researched using UK fertility clinics. Realising the constant checks and in and out of the fertility clinic we opted for the closest clinic to us.”

The couple then had to think about ‘shopping for a sperm donor’ as Angela described it.

She added: “This is not an easy decision to make. How can anyone decide from a list of information? Some of the decision is taken away from you as you need to be compatible with the donor, so this limited our choices. We wanted to go with someone who sounded like a nice person, not based on looks or job. This helped and we made a decision.”

Angela and Siobhan had 18 months of disappointment. They had two failed Intrauterine Insemination (IUI) — a type of artificial insemination, an embryo transfer which resulted in a miscarriage and a failed IVF attempt. They decided to take some time away from fertility treatment to emotionally, mentally and physically get healthy again.

Then things started to look promising for the couple.

Angela added: “Thinking it would take a month or two to get going again we were astonished when they said we were good to go. So that night we started the injections and three weeks later and 22 eggs were ready. Thirteen were taken out and 10 fertilised and six got to blastocyst stage. It was then we were ready for implantation.

“The consultant asked one egg or two. We went through the pros and cons and decided it would be best to have two put in.”

The long wait after the implantation followed and then a positive pregnancy test revealed the happy news the couple had long waited for.

They tried not to get too excited and just weeks later before a viability scan, Angela started to bleed and called the clinic in a panic.

Looking back on what happened and the huge surprise that followed, she said: “We arrived at the clinic fearing the worst. I was waiting for the nurse to scan me. She confirmed right away there was a heartbeat, and we were so relieved, Knowing we had two eggs in, she said I’ll look for the other one. And then there was two.

“She showed us the first one and said she wanted to go and get the consultant to check the second one. As she was moving the scanner I noticed the second heartbeat and said ‘oh look there is the second one’. No, it wasn’t, it was number three.

“Shocked and bemused we left the clinic to start the next chapter of our triplet baby journey.”

After learning they were expecting triplets and reality started to set in, the couple made the big move from their home in Kent back to Belfast, knowing they would have family nearby to support them.

When she was pregnant Angela discovered Twins Trust, a charity which supports families with twins, triplets or more. At the charity she found a wealth of resources to help the family and completed an antenatal course.

Angela said: “Twins Trust was just so incredible for us a family as we started to get excited about our life with multiples.” 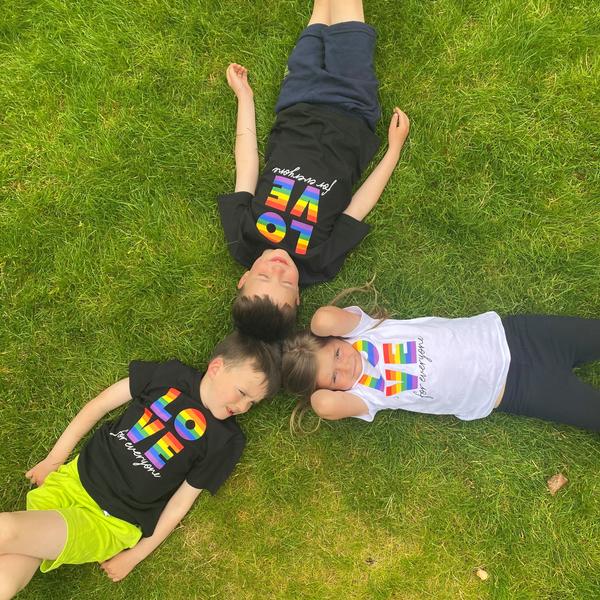 Angela had been working as a youth worker while pregnant but as a mum to triplets, she decided she would be a stay-at-home mum. Luckily she had a straightforward triplet pregnancy and babies Theodore, Meredith and Lochlainn McArthur-Cullen were born via planned C-section on 10 May 2016 at Craigavon Area Hospital, Craigavon.

The babies were taken to the Neonatal Intensive Care Unit. Shortly after Angela met a midwife who called her “mum”, something that meant the world to Angela.

She said: “She was the first midwife who called me mum. It just made me feel more comfortable and like a family. The tiny things do make a difference when it comes to having a same sex couple in for delivery.

“The next day they gave me a box of nappies and a box of bottles and I wondered how I was meant to look after three babies on my own.”

The family returned home after about a week and found themselves navigating the incredibly busy days of caring for three newborn babies.

“I slept when they slept, I took that fully on board. I didn’t care what the house looked like. For me my mental health was so important,” Angela said.

The triplets thrived and as the family found the routine that worked for them, life continued to go as smoothly as it could with three children to care for. Angela volunteered for Twins Trust helping to set up twins clubs. Now she works for the charity as the Northern Ireland Clubs Officer.

In the early years of the triplets’ lives, Angela campaigned and spoke at Stormont to have her family recognised as the same as other families.

Angela added: “It is really important that legalisation keeps up with the changing inclusiveness of the wider society. In 2020 Equal Marriage was passed and Siobhan and I plan to upgrade our civil partnership in 2023 with our triplets as part of our celebration.”

Now the triplets are six years old, they are happy and growing up fast and Angela and Siobhan love watching their relationship develop.

What does Pride mean to Angela and Siobhan?

Angela added: “For us, it just means that we are seen as a family. I have been campaigning since 2004 for the LGBTQ+ community. You can do all these things and that’s something to be proud of as a nation.

“It’s not just about Siobhan and I having Pride, it’s about seeing how far our community has come.

I remember the kids’ first Pride. They were only two months old. I was so overwhelmed with emotions and so proud to be walking in the parade with a generation of children who have nothing to hide about being from a same sex family.