As a mum of 18-year-old identical twin daughters, you’d think by now I would be versed in the challenges that come with multiple birth children. After all, as a family we have conquered cancer, cavorted with Covid, laughed our way through lockdown and nailed the Nat 5’s and Highers school qualifications.

Yup, as a family I would say we have smashed it. That was until Rosie and Mary turned 17 last year. Toot toot! Peep peep! The messages kept rolling in, and every one followed the same four-wheeled topic.

The girls’ excitement was palpable. Visions of road trips in VW campervans to sunny beaches with surf boards – even though we live in Scotland where it is barely warm enough to take off your jumper. 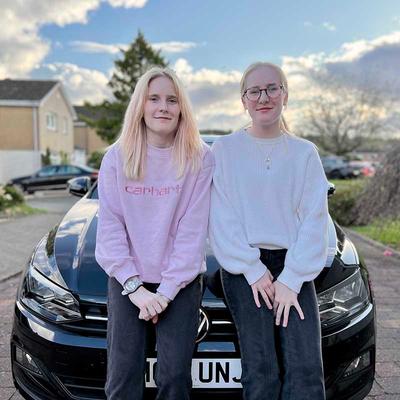 How I hated to be the one to burst their bubble. The first hurdle was the impact of Covid and the long queue of potential drivers deprived of lessons during lockdown, meaning driving instructors were in short supply. “Mum, dad, it doesn’t matter, you guys can just teach us,” came the response. Hm, let me think about that… “No way!”

The twin force is strong with my two, though, and by 4 o’clock that day our car was insured and I was gripping the sides of the passenger seat for dear life. We hadn’t even left the driveway.

As days turned to weeks, our evenings were filled with unnecessary supermarket trips while they tackled roundabouts. Instead of me driving them to music lessons, I was now merely a passenger. We had many a country drive, pulling over in torrential rain when neither of us could see, and, most fun of all, learning to drive in snow…

Having had me as a passenger, I think the girls were relieved when Gregor, driving instructor supreme, finally had space for them both and dutifully corrected all the mistakes I had instilled.

The other Covid curveball was getting a test. Dates were hard to find in our area. Even after passing their theory tests, they had four months to wait for a slot.

Naturally, only one slot came up. You can imagine our surprise when the girls calmly decided that Rosie, as the eldest by twenty minutes, should go first. Luckily Mary got a cancellation just two days after. Fantastic!

You might think by now I would be used to the anxiety of “how do I handle it if one passes and one fails?”. We have become experts in encouraging the girls to be supportive of each other and as a rule they are good at not comparing themselves, cherishing both their individuality and twinship. But with the driving test, they both wanted to pass so badly.

Test day for Rosie arrived. Why was this so much worse than any exam before, I wondered. Maybe I had a deep-seated fear of the freedom that driving would bring them. Or was it fear that the babies I had so carefully nurtured might be involved in an accident? Maybe it was just our family’s history of injuring themselves on bikes, skateboards or even in the wildlife garden at school. Who knows – but the fear was real.

Rosie left the house with her driving instructor while I spent the next 40 minutes rambling to my workmates (“Rosie will be fine! She’s so calm and composed!”). The front door opened and there, cheeks flushed, eyes full of tears, was Rosie. I was transported back to when she was a babe in arms crying and all she wanted me to do was make it better.

It turned out she had completed the test with no minor faults, but sadly on the way home had veered slightly out of lane on a roundabout – a major fault and an instant fail.

I felt awful for her. I reassured her that all the best people fail first time round, and next time would be her time.

Two days later it was Mary’s turn. Now, what can I say about Mary? She has a lust for life. She’s an adrenaline junky. It is a joy to see. It is also a total stress when it comes to exams or anything that can cause her to panic as, having ADHD, these can send her into overdrive.

We had to drop Mary at the test centre ourselves as she was sitting it in our car. I was banned from this excursion as apparently Mary could “smell the fear” on me. While Dad did the honours, I sat at home with Rosie. I must confess we were glued to the “Find my friends” app on my phone, tracking her journey. Meanwhile I worried… How do we cope if Mary fails? How do we cope if Mary passes? Why was this so blooming stressful! 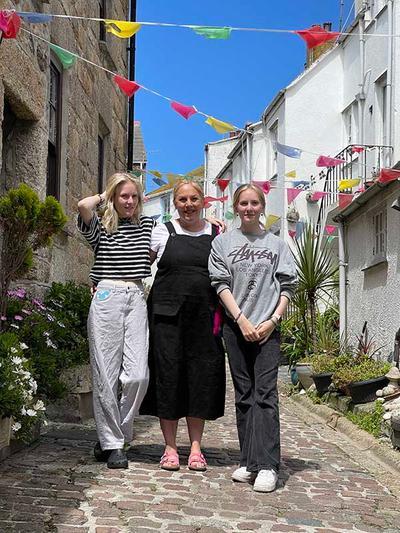 I waited for the text message to say either way but it didn’t come – of course not, this was Mary after all, queen of suspense. After 50 minutes our little black car pulled up on the driveway with Mary in the passenger seat and Bob, my husband, driving. The front door flew open and Mary stood there beaming: eight minor faults but she had passed!

I glanced at Rosie but to my utter joy she was beaming too, chuffed that Mary had passed – and would be chauffeuring her until her re-sit.

A week later off Rosie went with Gregor for her next test. I followed her progress on my phone. No sooner had the car arrived back at the test centre than there was a text message with… a string of party emojis and cars. She’d passed.

This has been a year of change for us Pecks. The girls now drop us off or pick us up from the pub. I am no longer a taxi driver. In a few months’ time they will have finished school and set off to pastures new. Exciting, life-defining moments for us all. Was it worth all the stress? Hell, yes!