“I was really enjoying being pregnant with twins and felt amazing, although admittedly lockdown with my two eldest was a challenge because of their own conflicting demands,” said Samantha Lubanzu, who’s a mother-of-four from Manchester.

Samantha was home alone with her two young children during the height of the Covid-19 pandemic and lockdown in April when she felt she might go into labour with her twins. But at just 27 weeks and 6 days she knew this was too early. 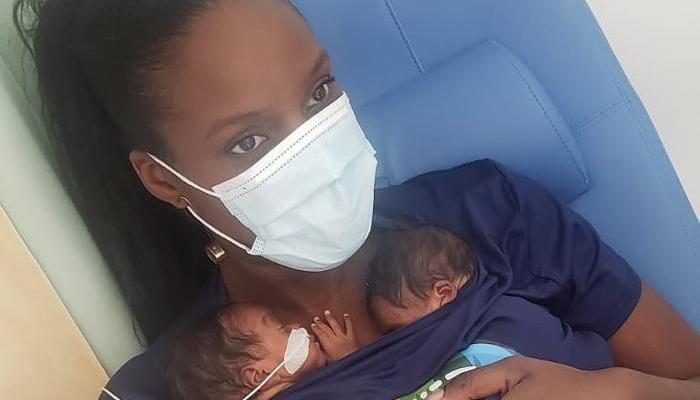 “I suddenly felt this huge urge to start pushing,” said Samantha. “It was such a worrying time. They didn’t want me in hospital because of Covid and they were so cautious about letting me come in.”

It wasn’t until Samantha was physically sick that she was told to come in and midwives discovered she was already 3cms dilated.

“Walking into the ward was like the zombie apocalypse, no-one was around. This did sort of reassure me because at that time we were all so worried about coming into contact with people and I had been isolating and taking all the proper precautions.

“When they examined me and found I was 3cms dilated it was action stations! Around 30 medical professionals were suddenly in the room and I was given drugs to slow down the contractions so that the steroids (to support the babies’ lungs) and magnesium (to support their brain development) could kick in.

It’s amazing that through what would have seemed a living circus of professionals panicking around me I was completely calm and relaxed.

Samantha’s husband Luis, who works as a mental health nurse, was then allowed to come in.

“It was great having him by my side, but I wasn’t able to have my mum in as well, which is something I’d wanted because I am a twin myself and she would have had some great advice. We were able to talk on the phone.”

When Samantha’s contractions started again, she warned midwives that as soon as her waters broke, the birth would be quick – and it was!

“Ameliah just flew out – a midwife caught her. There were so many people around and she had to be taken away by the neonatal team.

“Unfortunately, Levi’s arm was out, and he was in an awkward position, so the team wanted to do a c-section. I really wanted to try to deliver him naturally, but my contractions had stopped.

“They whisked me into theatre and again I pleaded with them to let me deliver naturally. They agreed and I was given induction drugs and 30 minutes to deliver. The drugs worked immediately, and I was in agonising pain, but he came out just at the last minute, so I avoided a c-section!”

It was a few hours before Samantha could see her twins who were born at 28 weeks. “We couldn’t quite believe how tiny they were. Ameliah was 2lb 5 and Levi 2lb 3, you could fit them in the palm of your hand.”

The twins spent just five days in neonatal intensive care and were then moved to special care at another hospital closer to home where they stayed for 56 days and had two blood transfusions. It was during this time that Samantha became unwell.

Just after the birth the mother-of-four had an infection, which meant she couldn’t walk or hold her babies. Then a few weeks later she developed mastitis and was admitted to hospital on the maternity ward, close to the neonatal ward where her babies were, for almost 3 weeks.

“The pain was agonising. I was extremely poorly and unable to walk, I lost all feeling down my left side. The nurses were just amazing and pushed me in a wheelchair to let me see my babies every day.

“Slowly I started to build up my strength, I had to be strong for them and for my two other children at home (four-year-old Eliyanah and two-year-old Luis) who wanted to see their mummy and meet their new brother and sister. I slowly built up my strength and started walking with a zimmer frame to see the twins, it was all surreal.

“All this time my amazing husband was working hard and doing round trips to hospital, picking up and dropping off to nursery.

“I have never seen him work so hard and I am so grateful to our local community who left food for us and supported us emotionally.”

Samantha said it was an emotional day when they finally returned home in the middle of June.

“I sometimes can’t believe what we went through,” said Samantha, “but we got through it and I am so grateful to everyone for their support, including Twins Trust who, through their fantastic Family Support Service, put me in touch with the wonderful Patsi who helped me get the twins into a good routine, offered reflux support and with the food allergy advice she was amazing.

“I followed her advice to the letter and have to say that my twins now sleep 12 hours through the night and we have set play, nap, cuddle, bath and bedtimes that really work for me and my family of four under five!” 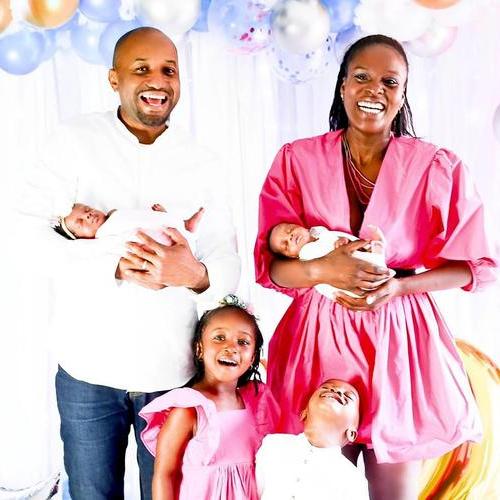