We are delighted to invite Harriet Gibbs to this session to answer your sleep questions.  Harriet is an experienced Health Visitor and a qualified Sleep Consultant as well as a busy mum to her son and twin girls.  Harriet is passionate about supporting parents through any sleep issues they might be experiencing – from newborn babies up to 5 years old.

Wanting to learn more about the sleeping needs and habits of your twins triplets or more?  View our sleep Q&A’s as answered by a qualified sleep consultant.  *Please note this Q&A session has now closed. 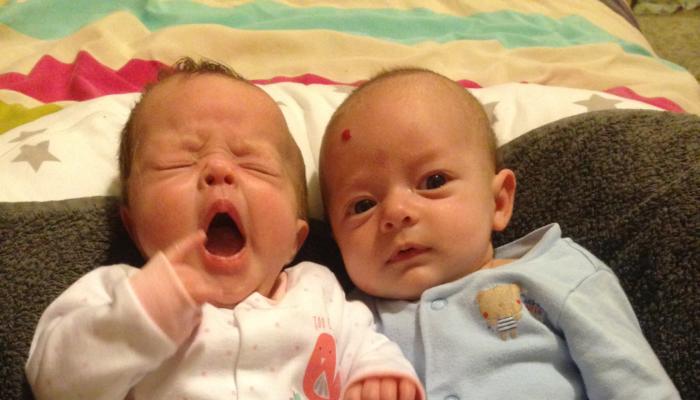 If you need to contact our forum moderator: [email protected]

To learn more about Harriet’s sleep consultancy you can visit her Facebook page.

My boys have been 'sleep trained' for some time and other than some nap tweaks, they have slept pretty consistently. However for the past 2-3mths, we have had wakes (from T1) of 5.45am, which leaves them tired and miserable and is having a huge impact on the day (and our mental health). Ideally I'd like them to wake at 6.30am. They have an hour and a half nap and up until now I have followed the wake time guides from a twin sleep facebook group and this has taught me loads but for whatever reason now, the 5.45am remains. I do try and put T1 back to bed, but he shouts and screams and begins to bang or kick the door. I can't leave him as this would wake the neighbour (or my 4.5yr old), so we all end up downstairs (which is against everything I have learnt but I have no other option). We've tried shorter nap, longer nap, earlier bedtime and later bed time, but nothing seems to help. They are no where near ready to drop their nap, they go to sleep quickly, they have white noise and black out blinds, they don't wake during the night. We also have other issues - delayed speech in both and T1 has attachment issues with me at the moment, and I really think that lack of sleep compounds these by leaving everyone tired, frustrated and irritable. Does anyone have any magical guidance or tips that have worked for them? Thank you